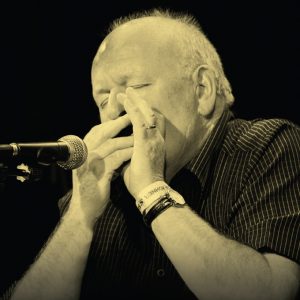 Being a native of Benderloch, Argyll, Scotland, Donald’s roots are firmly steeped in the West of Scotland Highland Bagpipe and Gaelic tradition but his repertoire extends well beyond to embrace the idioms of Ireland, Shetland Isles, Nova Scotia and mainstream Scotland.

His live concert performances of thoroughly challenging jigs, marches, hornpipes, strathspeys, reels and emotionally charged slow airs and laments have delighted audiences from the highlands and islands of Scotland, UK-wide, through Europe – from Moscow to Kansas City, Syracuse, Chicago and Tulsa, U.S.A..

Donald got involved in the Scottish traditional music scene later on in life, however, when, in 1993, he was noticed playing “for fun” in a Glasgow bar by the hugely talented multi-instrumentalist/composer Phil Cunningham who invited him to appear on the then currently running “Talla A’ Bhaile” (Village Hall) BBC TV programme of which Phil was the musical director. This gave Donald the impetus (combined with self-determination) to take things further. So, in 1995, his first album (“Westwinds”) was released on the Greentrax label.

One of the guests on this was Malcolm Jones from the legendary Celtic Rock band Runrig and soon after that he and Donald formed a very successful musical partnership lasting several years. However, later health issues meant that Malcolm sometimes was forced to reduce his workload and guitarist Donnie Mackenzie stepped in.

In October 2000, Donald and Malcolm released their “Close to Home” album on the Skye-based Macmeanmna label. This proved to be a very well received and enjoyable project, recorded in the Scottish highlands, utilising the full range of Donald’s harmonica collection and Malcolm’s stringed instruments and accordions.

Donald’s fifth and latest “Bho m’ Chridhe” (From my Heart) album was released in May 2017, receiving excellent reviews – see Albums

In 2015 Donald was very honoured to have been invited by Nashville harmonica and multi-instrumentalist legend Charlie McCoy, “the most recorded harmonica player in history”, to duet on his Celtic Dreams album; after which Charlie reciprocated by guesting a duet with Donald on the above-mentioned Bho m’ Chridhe (From my Heart).

Donald’s musical influences have never come directly from the harmonica world, however. Rather, they have been predominantly from the west-coast Scottish pipe and Gaelic music exponents on accordion – and to some extent from fiddlers and pipers. It is no wonder that he is recognised for making the (tremolo) harmonica “sound like an accordion”. 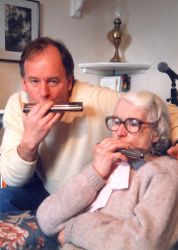 But Donald’s love of and enthusiasm for the music he plays surely comes from his late mother Christina (“Teenie”), herself an Argyll-born West Coast Scottish Highlander and fluent speaker of her native Gaelic tongue. Right up to her late 80s she could knock out a good tune on the mouthorgan and 2-row button accordion with great style and feeling. So, needless to say, over the years, when at all possible, she and “Donnie” would get together for a “wee tune or two”. Donald and she were very close and he is especially proud of a TV appearance she made with him (at the age of 86) in October 2002 on a BBC TV Gaelic documentary playing her favourite 2/4 pipe March.

In his life so far, Donald Black has found himself in a whole variety of different roles from forestry worker, cattlehand in the Australian outback – to insurance salesman, building site labourer and University Honours graduate. None, however, will ever be more meaningful or spiritually rewarding to him than playing the exquisite music of his people. Donald lives in his native Scotland and is married to Lorna.

These days Donald generally performs in a very compact three-piece lineup with Donnie Mackenzie (from the island of Lewis) on acoustic guitar and Màrtainn Skene (from Spean Bridge) on accordion/keyboard – THE DONALD BLACK BAND.

We use cookies on our website to give you the most relevant experience by remembering your preferences and repeat visits. By clicking “Accept All”, you consent to the use of ALL the cookies. However, you may visit "Cookie Settings" to provide a controlled consent.
Cookie SettingsAccept All
Manage consent

This website uses cookies to improve your experience while you navigate through the website. Out of these, the cookies that are categorized as necessary are stored on your browser as they are essential for the working of basic functionalities of the website. We also use third-party cookies that help us analyze and understand how you use this website. These cookies will be stored in your browser only with your consent. You also have the option to opt-out of these cookies. But opting out of some of these cookies may affect your browsing experience.
Necessary Always Enabled
Necessary cookies are absolutely essential for the website to function properly. These cookies ensure basic functionalities and security features of the website, anonymously.
Functional
Functional cookies help to perform certain functionalities like sharing the content of the website on social media platforms, collect feedbacks, and other third-party features.
Performance
Performance cookies are used to understand and analyze the key performance indexes of the website which helps in delivering a better user experience for the visitors.
Analytics
Analytical cookies are used to understand how visitors interact with the website. These cookies help provide information on metrics the number of visitors, bounce rate, traffic source, etc.
Advertisement
Advertisement cookies are used to provide visitors with relevant ads and marketing campaigns. These cookies track visitors across websites and collect information to provide customized ads.
Others
Other uncategorized cookies are those that are being analyzed and have not been classified into a category as yet.
SAVE & ACCEPT