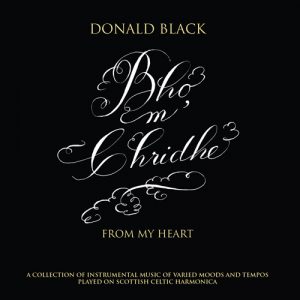 “Argyll-born harmonica virtuoso Donald Black brings sessions from Nashville to Nova Scotia and from Lewis to the Lothians together on this aptly named instrumental album.” He… “transfers the music of the bagpipes and the swinging Western Highland dance bands to the humble moothie with great feeling and absolute mastery… Bringing in Charlie McCoy, the author and player of The Old Grey Whistle Test theme… Black draws on both peatlands and prairies for inspiration, and the rollicking Canadian-Scottish dance set with Cape Breton pianist Mario Collosimo underlines” his “ability to sound as commanding as the great accordionists of the dance music tradition…
…there are examples of Black’s heartfelt slow air playing, with Runrig’s Malcolm Jones on guitar and Màrtainn Skene on cello wringing out every ounce of atmosphere on MacCrimmon’s Lament and The Edge of the White Rock respectively.”

Jim Gilchrist, The Scotsman, May 2017

“…It is the art of the harmonica that shines in the album, perhaps an instrument that does not get the recognition that it deserves outside the delta Blues genre, but one, when utilized with charm and guile, can leave the listener understanding why it can be so powerful a weapon of sincerity and cool, that it can act as a mouth-driven sonar, bouncing back, adding a distinctive echo that captures and encourages the potential in others to rise up and take notice… Donald Black leaves more than his mark on the genre, he takes the harmonica and turns it into a series of softly delivered caresses that leave the listener exhilerated and wanting more… Bho m’ Chridhe (From my Heart) is where life begins…” ✪✪✪✪ (4 stars)

Harmonicas are free reed instruments like concertinas, accordions and many others and Donald treats them as such… To put it mildly, he is a virtuoso and though fans of blues harp and jazz players will point to their heroes, in Donald Black’s hands the harmonica will sit up and beg. Not because of speed, although the second set Pipe Reels could raise blisters, but because of flexibility and feel and an understanding of what the instrument can do…
So Bho m’ Chridhe isn’t a solo album in the strictest sense nor is it an academic performance of tunes. It is varied, beautiful, exciting and a whole load of fun.

Describing a music style as ‘unique’ immediately sets a pretty high standard. It also places instant demands on any musician. Safe to state that in this case the description is accurate, the standard unsurpassed, coupled with a masterful ability to exceed the demands. Who does this introduction describe? Scottish Celtic Harmonica player Donald Black… reveal that name and everything becomes clear… His latest album, ‘Bho m’ Chridhe’ (From my Heart) weaves a path through hornpipes, reels, waltzes, marches, jigs, slow airs and polkas… the result is soothing, enthralling, invigorating and captivating. From the opening moments… it is clear you are listening to a virtuoso musician displaying total mastery of his chosen instrument… Often relegated to the role of accompaniment, Black raises the harmonica to front and centre… Listen to his delivery of’6/8 Marches’, ‘New Island Waltz’, the atmospheric slow airs ‘Bruach Na Carraige Baine’ or ‘Cumha Mhic Criomain’ and his touch is stunningly obvious.
‘Bho m’ Chridhe’ eliminates any preconceptions about the harmonica and introduces the embodiment of unique.

While Donald’s heart is undoubtedly filled with the traditional music of the Highlands, this album is a reminder that he also holds a special place for international music and friendship. It is well worth getting a hold of.

Scotland’s very own Donald Black plays a true gem of his native soil… Hailing from Benderloch, Argyll, his music roots are decidedly of the West of Scotland Highland Bagpipe and Gaelic tradition.” His “live performances have delighted audiences of Scotland, England, throughout Europe and from Moscow to Kansas City. A tour de force!
On his most recent offering and his fifth album… Donald plays tremolo, octave and ten hole diatonic harmonicas; displaying a repertoire of challenging jigs, hornpipes, marches, waltzes, reels, polkas, a highland schottische, Canadian-Scottish two-step, clog and reels and emotionally charged Celtic Scottish and Irish slow airs…
Altogether, the album has 16 tracks – great value! A true gem of Scotland indeed!
Highly recommended! Every harmonica player should have this CD in their collection as a reference to pure traditional playing on the harmonica.

…Donald Black is the leading practitioner of the moothie as a traditional instrument and he goes a long way towards transcending the gob iron’s image as something you stuff in your pocket and forget about… No, size isn’t everything; versatility, variety and soul count for a lot as well. The CD’s title translates as From my Heart, and that is a fair indication of Mr Black’s aspirations to paint the big emotional picture…

I’ve been listening to your CD – Great series of recordings. You get this hair-raising… something… between tremolo and a vibrato that is like nothing I have ever heard coming out of a harmonica. 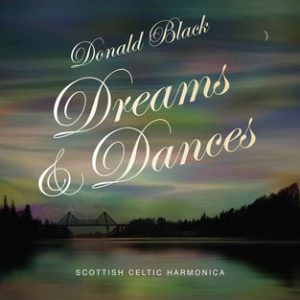 This exciting Creative Scotland / Macmeanmna Recordings project, produced by Allan Henderson, is considerably varied, containing 16 tracks of Celtic moods and tempos, and, as the title implies, ranging from the slow, powerful, poignant pieces through to the 'up-tempo'.
The material is, typically, mostly Scottish / Highland / Gaelic in essence, ranging from the very traditional through to the newly penned. Two lovely Canadian slow airs are included plus a couple of tunes written by Donald himself.
Donald is joined by two very impressive young Highland musicians on most of the tracks:- Ross Wilson (Keyboard, Double Bass and Accordion) and Allan Nairn (Acoustic and Electric Guitars, Mandolin and Drums). Also guesting on the album are Allan Henderson (Fiddle), Harvey Leckie (Keyboard) and Trish Strain (Cello). [Macmeanmna SKYECD55]

The expert harmonica player heaps bagpipe tunes in among the country music, a contemporary Fergie MacDonald lament called Afghanistan, and ‘slow and sad Gaelic airs’. His repertoire here, as the most professional and accomplished of Scottish moothie players – and accompanied by piano, guitar, fiddle and cello – is firmly rooted in Gaelic music and the old Argyllshire traditions, and includes at least half a dozen of these slow and evocative airs. The rest is a mix of waltzes, jigs, marches and reels – the latter three punched out as if by a tight melodeon-led Highland dance band, but with precise breath control, while Black lets his feelings hang out in the Gaelic medley of three slow waltzes.

Donald Black, the magician of the mouthorgan, is on top form again with this new CD… He’s not given to half measures and this selection will not disappoint… This is a collection for lovers of Highland music to cherish.

Donald MacLeod, Am Bratsch (The News Magazine of the North West), Sutherland, March 2013

The most clichéd adjective applied to the moothie is ‘humble’ although it is hard to see why: relatively easy to knock a simple tune out from, it needs a lot of skill to play it as a lead instrument. Here Donald shows us playing of an unmatched brilliance, demonstrating the range and variety available from the tremolo and 10-hole diatonic models (…) The combinations available from this instrument allow a great range of richly-layered melodies and harmonies to result in an album which is a delight from start to finish (…) The whole of the album continues to balance sets of differing tempo and timbre, all of which result in a CD which you won’t just play once and then file away – this is one you’ll want to hear over and over. 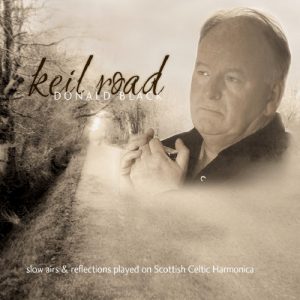 This is a ground-breaking album of slow reflective melodies (apart from an 'old-timey- Canadian waltz and Donald's singing of a favourite gaelic song) mostly drawn from the West of Scotland gaelic tradition, played on harmonica.
The dramatic title track 'Keil Road' was composed by Donald himself and gets its name from a road in the lovely village of Benderloch, Argyll - a place very close to his heart.
In this venture Donald has also taken the daring and bold step of recording a Pibroch on the harmonica - never ever done before!! The album commences with a powerful and poignant version of that great gaelic classic Do'n Chuthaig (The Cuckoo) and ends with a masterly composition from Malcolm Jones - Fuaran (Cool Water Spring) - helping to give it a somewhat eclectic dimension.
On Keil Road (mostly played in 'first position' on 10 hole diatonic harmonica with 'doctored' reeds) Donald is joined by the following impressive array of guest artistes, each of whom contributes so hugely to a wonderful diversity of texture and sound: Aly Bain M.B.E., Duncan Chisholm, Alex Dalglish, Fraser Fifield, Allan Henderson, Neil Johnstone, Catriona Laird, Duncan Lyall, Iain MacDonald, Maggie MacInnes, Donnie MacKenzie, Donald Shaw. [Macmeanmna SKYECD44]

Keil Road “…is a beautiful collection dominated by Black’s controlled but expressive playing.”

“Keil Road is the new splendid album from Donald Black” … “there is much of this disc which touches my heart” … “A nostalgic and inspired CD … that will surely appeal to those passionate about Celtic music and to those who love the melancholic and moving sound of the ten hole [i.e. Diatonic Harmonica]. An unmissable disc for those who want to enjoy listening to magical and dreaming atmospheres.”

Keil Road “could have been a recipe for a rather bland collection in other hands, but Black’s technical facility and expressive interpretations ensure it remains an engaging listen…”

If you know someone with a taste for traditional gaelic music, played with great feeling and skill, then look no further than Keil Road… 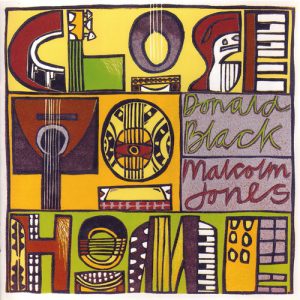 Close to Home is wonderful, enjoyable and almost magical… Donald Black’s harmonica plays a wonderful melody… And goes straight to the heart. A particular round of applause goes to Malcolm Jones who throughout the album plays… with great ability and gusto. I loved the CD. 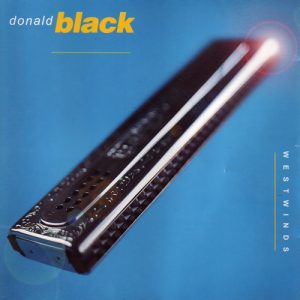 ‘Westwinds’ is one hell of an album, a belter in fact.

Compilation albums with other artistes

We use cookies on our website to give you the most relevant experience by remembering your preferences and repeat visits. By clicking “Accept All”, you consent to the use of ALL the cookies. However, you may visit "Cookie Settings" to provide a controlled consent.
Cookie SettingsAccept All
Manage consent

This website uses cookies to improve your experience while you navigate through the website. Out of these, the cookies that are categorized as necessary are stored on your browser as they are essential for the working of basic functionalities of the website. We also use third-party cookies that help us analyze and understand how you use this website. These cookies will be stored in your browser only with your consent. You also have the option to opt-out of these cookies. But opting out of some of these cookies may affect your browsing experience.
Necessary Always Enabled
Necessary cookies are absolutely essential for the website to function properly. These cookies ensure basic functionalities and security features of the website, anonymously.
Functional
Functional cookies help to perform certain functionalities like sharing the content of the website on social media platforms, collect feedbacks, and other third-party features.
Performance
Performance cookies are used to understand and analyze the key performance indexes of the website which helps in delivering a better user experience for the visitors.
Analytics
Analytical cookies are used to understand how visitors interact with the website. These cookies help provide information on metrics the number of visitors, bounce rate, traffic source, etc.
Advertisement
Advertisement cookies are used to provide visitors with relevant ads and marketing campaigns. These cookies track visitors across websites and collect information to provide customized ads.
Others
Other uncategorized cookies are those that are being analyzed and have not been classified into a category as yet.
SAVE & ACCEPT